skip to main | skip to sidebar

A Bird Landed on her Head!!!

This ugly doll has a bit of a story.

The pattern started out as a witch doll. I don't do witches, so I was just going to make her as a mean old lady.

I got her stuffed and coffee stained, then when I went to put it together, it just didn't look right to me. I was going to cut it open and take out the stuffing to reuse. Then, I thought I'd just reshape what is now her head, which was supposed to be her neck according to the pattern.
I cut open the bottom and started to take out the stuffing, then I thought,,,,,,maybe I could use it as it is, since the top part is more narrow than the bottom. So,,,,,,,I drew on a face, needle sculpted the nose and mouth and went on from there.

The short arms and legs were originally supposed to be attached at the bottom of a dress and the sleeves, which is why they're so short. I decided to just attach them to the "body" and have a short, stumpy doll. 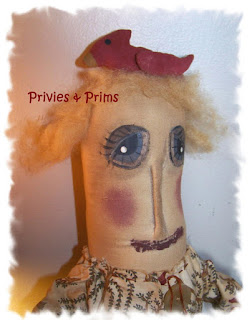 The red bird was for a snowman pattern. I made the snowman and the bird over a year ago, but never finished it. The bodice fabric has cardinals on it, and I remembered that I had that cardinal in a bag of odds and ends that I had made. I sewed the blonde sheep's wool on, then perched the bird on top and I liked it! I put a few stitches on to attach the bird to the doll's head, so it won't be flying away. :)

When she was all done, I liked her! She's ugly, but I like her and I'm hoping someone else will too! 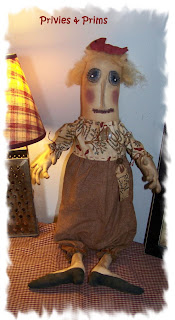 If you like extreme primitive and ugly dolls, click on the close up and check out her listing~~~

I think today may be our last snow day for awhile. The sun is shining and it's actually a bit warmer today. School has been out all week, but I think the vacation may be over!
at 12:57 PM

OMGosh! She looks like my fourth grade teacher Mrs. Korting. I like her! She's not ugly, she's unique:) Good save Doreen. Hugs~Carol

Promote Your Page Too 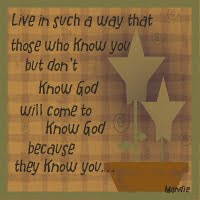 Some of the blogs I read~when I have time;)